The Zoot suit, wide lapels, “shoulders padded like a lunatic’s cell” in the words of Malcolm X and tight pegged blousy trousers with the ever stylish watch chain hanging low. There was a strut to the proper Zoot Suited man that declared he was the king of the street, a man of style, sophistication and bravado. 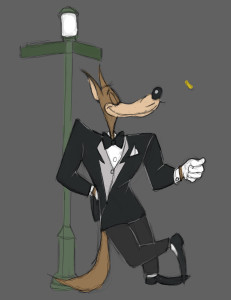 Most people today might think of the Mask and his yellow Zoot Suit or one of the old Tex Avery cartoons with the suave Zoot Suited Wolf but at one time in America the Zoot Suit was the uniform of a revolutionary faction, much like the Hippies or Yippies or Occupy or Tea Party the Zoot Suiters of the 1940s were opposed to the war and the powers behind wars. In a time of patriotic fervor and mass conformity wearing the oversized suit was a declaration of freedom and self-determination, even rebelliousness. With the onset of WWII the Zoot Suit was outlawed under the War Powers Act following the Zoot Suit riots.

In the early 1930s in Los Angeles County, more than 12,000 people of Mexican descent—including many American citizens—were deported to Mexico. Despite the deportations, by the late 1930s there were still about 3 million Mexican Americans in the United States. Los Angeles had the highest concentration of Mexicans outside of Mexico. They adopted their own music, language and dress. For the men, the style was to wear a zoot suit—a flamboyant long coat with baggy pegged pants, a pork pie hat, a long key chain, and shoes with thick soles. They called themselves “pachucos.” In the early 1940s, many arrests and negative stories in the Los Angeles Times fueled a negative perception of these pachuco gangs in the broader community. A murder pinned on 9 members of the 38th Street Gang, represented by their Zoot Suits, fueled a social rift resulting in riots between Anglo servicemen and blacks and Chicanos even though the 9 were tried,  convicted and sentenced only to be later exonerated. The Zoot Suit Riots sharply revealed a polarization between two youth groups within wartime society: the gangs of predominantly black and Mexican youths who were at the forefront of the zoot suit subculture, and the predominantly Anglo American servicemen stationed along the Pacific coast. The riots primarily had racial and social resonances, although some argue that the primary issue may have been patriotism and attitudes to the war.

In March 1942, the War Production Board’s first rationing act had a direct effect on the manufacture of suits and all clothing containing wool. In an attempt to institute a 26% cut-back in the use of fabrics, the War Production Board drew up regulations for the wartime manufacture of what Esquire magazine called, “streamlined suits by Uncle Sam.”The regulations effectively forbade the manufacture of zoot suits, and most legitimate tailoring companies ceased to manufacture or advertise any suits that fell outside the War Production Board’s guide lines. However, the demand for zoot suits did not decline and a network of bootleg tailors based in Los Angeles and New York City continued to manufacture the garments. Thus, the polarization between servicemen and pachucos was immediately visible: the chino shirt and battledress were evidently uniforms of patriotism, whereas wearing a zoot suit was a deliberate and public way of flouting the regulations of rationing. The zoot suit was a moral and social scandal in the eyes of the authorities, not simply because it was associated with petty crime and violence, but because it openly snubbed the laws of rationing.

Two conflicts between Mexicans and white military personnel had a great effect on the start of the riots. The first occurred on May 30, 1943, four days before the start of the riots. The altercation involved a dozen sailors and soldiers including Seaman Second Class Joe Dacy Coleman. The group was walking down Main Street when they spotted a group of young Mexican women on the opposite side of the street. With the exception of Coleman and another soldier, the group crossed the street to approach and harass the women. Coleman continued on, walking past a small group of young men in zoot suits. As he walked by, Coleman saw one of the young men raise his arm in an allegedly threatening manner, so he turned around and grabbed it. It was then that something or someone struck the sailor in the back of the head, at which point he fell unconscious to the ground, allegedly breaking his jaw in two places. On the opposite side of the street, young men attacked the servicemen for harassing the women. In the midst of this battle, the service men managed to fight their way to Coleman and drag him to safety. 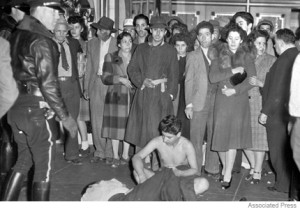 The second incident took place four days later on the night of June 3, 1943. About eleven sailors got off a bus and started walking along Main Street in Downtown Los Angeles. At some point they ran into a group of young Mexicans dressed in zoot suits and got in a verbal argument. The sailors stated that they were jumped and beaten by this gang of zoot suiters. The Los Angeles Police Department responded to the incident, many of them off-duty officers calling themselves the Vengeance Squad, who went to the scene “seeking to clean up Main Street from what they viewed as the loathsome influence of pachuco gangs.” The next day, 200 members of the U.S. Navy got a convoy of about 20 taxicabs and headed for East Los Angeles. When the sailors spotted their first victims, most of them 12- to 13-year-old boys, they clubbed the boys and any adults who tried to stop them. They also stripped the boys of their zoot suits and burned the tattered clothes in a pile. They were determined to attack and strip all minorities that they came across wearing zoot suits. It was with this attack that the Zoot Suit Riots started.

As the violence escalated over the ensuing days, thousands of white servicemen joined the attacks, marching abreast down streets, entering bars and movie houses and assaulting any young Latino males they encountered. In one incident, sailors dragged two zoot suiters on-stage as a film was being screened, stripped them in front of the audience, and then urinated on their suits. Although police accompanied the rioting servicemen, they had orders not to arrest any of them. After several days, more than 150 people had been injured and police had arrested more than 500 Latinos on charges ranging from “rioting” to “vagrancy”.

A witness to the attacks, journalist Carey McWilliams wrote,

“Marching through the streets of downtown Los Angeles, a mob of several thousand soldiers, sailors, and civilians, proceeded to beat up every zoot suiter they could find. Pushing its way into the important motion picture theaters, the mob ordered the management to turn on the house lights and then ran up and down the aisles dragging Mexicans out of their seats. Streetcars were halted while Mexicans, and some Filipinos and Negroes, were jerked from their seats, pushed into the streets and beaten with a sadistic frenzy.”

The Los Angeles City Council approved a resolution criminalizing the wearing of “zoot suits with reat pleats within the city limits of LA” after Councilman Norris Nelson stated “The zoot suit has become a badge of hoodlumism“. No ordinance was ever approved by the City Council or signed into law by the Mayor, although the council did encourage the War Production Board to take steps “to curb illegal production of men’s clothing in violation of WPB limitation orders.” White sailors and Marines had initially targeted only pachucos, but African-Americans in zoot suits were also attacked in the Central Avenue corridor area. This escalation compelled the Navy and Marine Corps command staffs to intervene on June 7, confining sailors and Marines to barracks and declaring Los Angeles off limits to all military personnel with enforcement by U.S. Navy Shore Patrol personnel. Their official position remained that their men were acting in self defense.

By the middle of June, the riots in Los Angeles were dying out but the riots spread throughout California and to cities in Texas and Arizona while incidents broke out in northern cities such as Detroit, New York City, and Philadelphia, where two members of Gene Krupa’s dance band were beaten up for wearing the band’s zoot suit stage costumes. A zoot suit riot at Cooley High School in Detroit, Michigan was initially dismissed as an “adolescent imitation” of the Los Angeles riots; however, within weeks, Detroit was in the midst of the worst race riot in its history.

At the same time, Mayor Fletcher Bowron said the riots were caused by Mexican juvenile delinquents and by white Southerners, a group arising out of a region in which both overt legal and socially sanctioned white racial discrimination held sway until the 1960s. Racial prejudice, according to Mayor Bowron, a white, was not a factor.

A week later, First Lady Eleanor Roosevelt commented on the riots, which the local press had largely attributed to criminal actions by Mexican Americans, in her newspaper column.

“The question goes deeper than just suits. It is a racial protest. I have been worried for a long time about the Mexican racial situation. It is a problem with roots going a long way back, and we do not always face these problems as we should.” – June 16, 1943

The Los Angeles Times printed an editorial the following day, in which it accused Mrs. Roosevelt of having communist leanings and stirring “race discord”.

On June 21, 1943, the State Un-American Activities Committee under State Senator Jack Tenney arrived in Los Angeles with orders to “determine whether the present Zoot Suit Riots were sponsored by Nazi agencies attempting to spread disunity between the United States and Latin-American countries.” Although Tenney claimed he had evidence the riots were “Axis-sponsored”, the evidence was never presented, although the claims were supported in the minds of the public by Japanese propaganda broadcasts accusing the United States’ government of ignoring the brutality of U.S. Marines toward Mexicans. In late 1944, ignoring the findings of the McGucken committee and the unanimous reversal of the convictions in the Sleepy Lagoon case on October 4, the Tenney Committee announced that the National Lawyers Guild was an “effective communist front.”