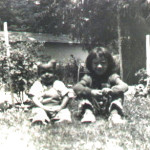 When I was real little I liked to stick things in my nose. Beans, Buttons, Toys. Around 4 or 5, I was given a small robot that walked and waved his gun and shot sparks. He was awesome, he was too big to put in my nose. He lasted a few days before I took him apart to see how he did what he did. I don’t recall seeing him after that. About that time, perhaps a year or so later, my dad took me into his computer room. He let me draw pictures on the side of a stack of punch cards, send them through the compiler and I watched as another machine reassembled my picture on the other side of the room. Then he showed me how the little holes in the cards could be read and told me how the computer could read the instructions on the cards and do what it was told. The little robot had wires that read instructions from a little cam on a motor! He said the computer was a robot, a robots brain. He would not let me out of his sight while I was in the computer room. I tried. 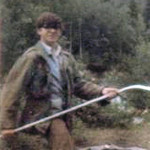 The first Vela Hotel pair was launched on October 17, 1963, though I did not hear about the secret launch at the time and would not be told until much later that my dad wrote the programs for the little space spycraft. Roy Rogers, snakes and tarantulas seemed much more interesting then what dad was doing for the Army in Arizona, I don’t think I ever saw his computers there, his clearance was too high by then to let me anywhere near them I think.

Somewhere in my early teens (I blame Alaska, but I was just being a rebellious teen) I turned tree hugging hippie. Really, I hugged trees, wore high top moccasin sandals, could tuck my hair in my belt and tried to ignore tecknology as much as possible, except TV…and telephones…and cars…flowers and beads are one thing, but ya gotta draw the line. Dad only took me to see his computers in Alaska once, I was not allowed into the room to play with any of them. In 1967 he left the Army after 21 years. It wasn’t until I got into the Army myself in 1977 that I started getting interested in computers again, when I got out around 1980 dad took me to his computer room in the unteenth floor of some bank building in the heart of LA and showed me the latest and greatest in computing. This time he let me wander around by myself a little, change out some hard drive disks and run the Decompiler and deburst a few reams of printout. His computer had little red lights that winked.

. Just before he retired from his private sector job he got a desk top computer, he was so proud of it, he took me down to his office in Santa Monica just to show it to me. We got a Vic 20 shortly after building a house to keep it in up in Washington State and I have almost never not had a computer since that time. I went to Electronics School in Spokane so I could understand what was going on inside of them better. 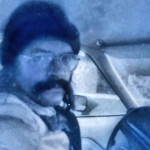 The Vic 20 was my friend, it could play music (sort of) and I could draw pictures on it and it would connect to a modem that would connect me with another network of computers. Most of the information was displayed using ordinary ASCII text or ANSI art on a green or gray screen and I could tell my computer to call a computer across the country in Washington DC on a toll free 800 government line and download as much as I could from the East coast computers before my connection automatically timed out. The first connect time usually involved finding and getting the BBS list telling what other Bulletin Board Services they connected with and what files they had to access.

If someone else got in before you you just had to wait. The 300 bits per seconds modems wouldn’t allow a lot of cross country porn surfing back then. I mean, information downloading. While I was marveling at the feats of the Vic 20 we put some guys in space, they set up a 1-800 number so we could call and talk to astronauts in orbit live from our house in the hills of of the high desert in Washington. I was thrilled with the very thought of such a leap in communications. The Amiga 500 blew it out for me, the crack of computing, 500 megabytes of pure pleasure, awesome sound, amazing graphics, blazing fast connection speeds of 14.4 Kbps and a mouse! I took it apart.

Only this time I managed to put my robot back together properly. I didn’t learn a lot about how it was doing what it did but I saw the hardware was really just simple stuff. I switched to PC’s, and shortly decided to build my own PC. The first one had one megabyte of memory I bought for $50 second hand. It was a righteous score! Now, what seems like just a few years after I was drawing pictures on punch cards in Poiters, France I can download the entire collection of the Louvre while sipping a cup of coffee and then start on the Library of Congress…(well, if the Republicans had not shut down the internet I could) I can use it to talk live with full color video feed to almost anywhere on the Planet except North Korea, which is a shame because there are a few things I’d like to tell Kim Ill Son…and the Unicorn he rode in on.

I watch my nieces and nephews with computing devices that I could have ruled the world with 30 years ago and imagine what the future will hold for us. The cell phone to the head thing will have to go, blue tooth will become dental implant. Click your jaw to the left to connect, yawn to disconnect. 3D projected screens emanating from the invisible thumbnail overlay powered by bio-electrical impulses in your thumb? I the span of two or three generations we will have gone from horses and kerosene lamps and a week for a letter to go 500 miles to bio-mechanical hybrids. I really hope that in 100 years computers still like us as much as we like them now. I doubt that in 500 years they will have left any of us around to worry about. Let’s blame it on the Chinese and that abacus thing.